What Are SILA Members Doing? Recently Reinstated Member Jerry McDaniel Has A Lot Going On: 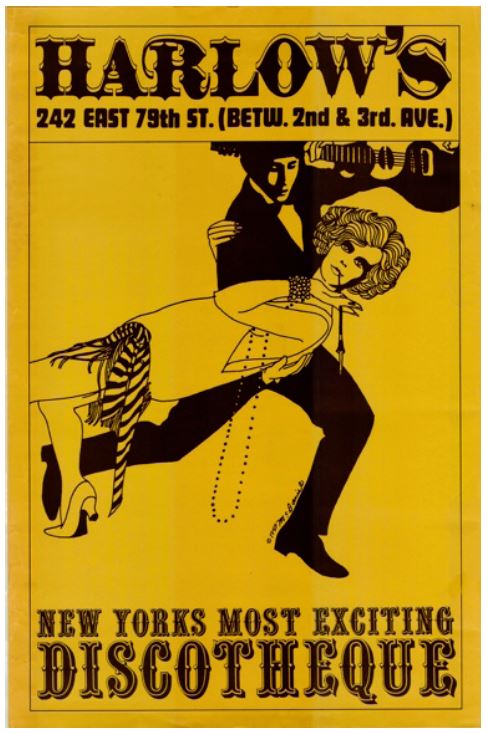 Jerry W. McDaniel, a member of the Society of Illustrators of Los Angeles (SILA) and a long-time member of the Society of Illustrators (SI) NYC, had recently discovered on Internet that one of his posters, Harlow’s – New York’s Most Exciting Discotheque (a 38” x 25 “ lithograph on
heavy stock golden-rod paper, 1968), was presented in the first exhibition of the new Poster Museum (a museum dedicated to posters) opened in 2018 in Chelsea, NYC. This poster is now
in the permanent collection of the NYC Poster Museum.

The month-long Gone Tomorrow exhibition, which opened on September 20, 2017, before remodeling the museum, displayed posters from closed venues and cult events that make up the fabric of the city’s history. One of these venues was Harlow’s disco, located at 242 East 79th Street, a “must go to” in New York. The Harlow’s disco was Jerry’s hangout. Mr. McDaniel designed the whole visual promotion for the Harlow’s discotheque and did two promotional posters one b&w and one on yellow background, the one shown in Gone
Tomorrow.

Mr. McDaniel is still trying to find out who selected his yellow Harlow’s poster to be one of the 112 posters in the Gone Tomorrow show.

The “older sister” of the yellow Harlow’s poster (a large, 50.5” x 39.5”, black & white pop, art deco poster, created in 1966 ), and Solidarity Works (an AFL-CIO commissioned poster for a March on Washington, 1981) are in the permanent collection of the Victoria & Albert (V&A)
Museum in London, UK, one of the most important museums of design in the world. Mc Daniel’s Solidarity Works poster is also in the permanent collection of the Society of Illustrators NY, as well as in several political museums around the US, among them in the
Center for the Study of Political Graphics (CSPG), Los Angeles, California. 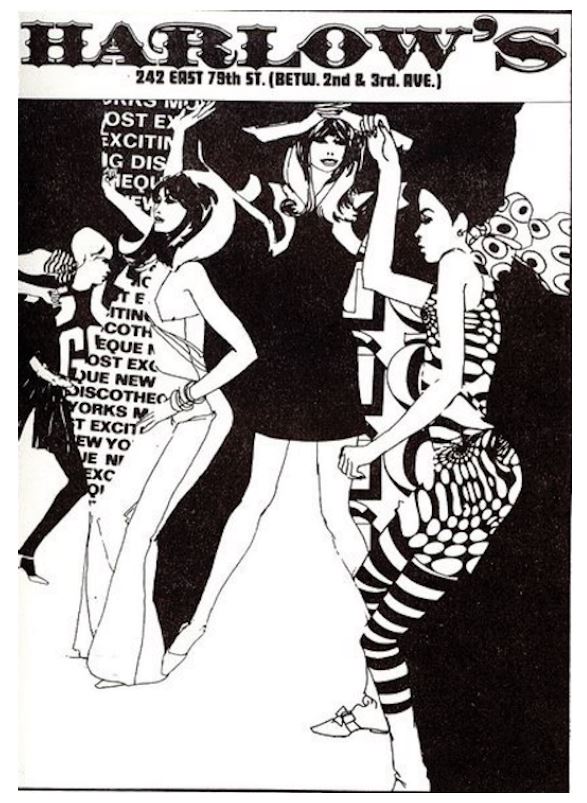 The b&w Harlow’s poster was accepted into the International Illustrators’ Annual 1968.

“In this poster Jerry W. McDaniel relies mostly on lines which he uses with a sophisticated, light touch. Combined with the line is an equally good sense of pattern employed for emphasis and visual excitement. This style has won him over two hundred citations and awards from shows at the New York art Directors Club, Graphics Annual, AIGA.

The b&w Harlow’s poster captures the essence of New York’s first disco. The poster is in the inimitable style of the 1960s displaying the flair for the groovy and the dramatic.” (Society of Illustrators Annual Book, 1968)

The real estate mogul Arnold Stein, the founder and owner of Harlow’s, insisted on a “steak house-type” font on the poster. Harlow’s started as a steak house because the laws of New York in those days did not allow entertainment without serving food. Harlow’s solved the problem by having a fire in the kitchen. The Western-style typography on both Harlow’s posters by McDaniel had an enormous influence on European advertising and editorial design. When the poster was published you could hardly walk anywhere in New York without seeing it: in store windows, on buildings, as well as on ferryboats in the Bengal Bay of India, and cruise ships. It got 30 minutes exposure on the 6 O’clock CBS news in relationship to the dismantling
of the old New York Metropolitan Opera House (nicknamed “The Yellow Brick Brewery”). The dressing style of the dancing girls in this poster had a big influence on the fashion of those times.

The b&w Harlow’s poster had even more success than the yellow. It appeared in a display at a major exhibition on Art Nouveau Revival at the well-known Musée d’Orsay (Paris, France, 20 October 2009 – 4 February 2010) on a page of Life Magazine September 6, 1968, where it is shown in the shop of the high-class night club in the Latin Quarter Chez Castel. The b&w Harlow’s poster was also featured in a double-spread in the Life Magazine (it appears at 1:12 minute on this video) September 6, 1967, about the explosion of posters everywhere.

How come McDaniel was not made aware of his yellow Harlow’s poster being part of the Gone Tomorrow show still remains a puzzle for him. Well, the poster was designed in 1968 and McDaniel has lived now for 16 years in Los Angeles. Thus, the show organizers might not have known where to find him or if he is still around and kicking!! This makes McDaniel smile, since, although he turned 84 on the 9th of September 2019, he is still working.

In 2017 McDaniel designed two posters for the night club Le Bal Blomet in Montparnasse Paris for a “The Duke” jazz evening. 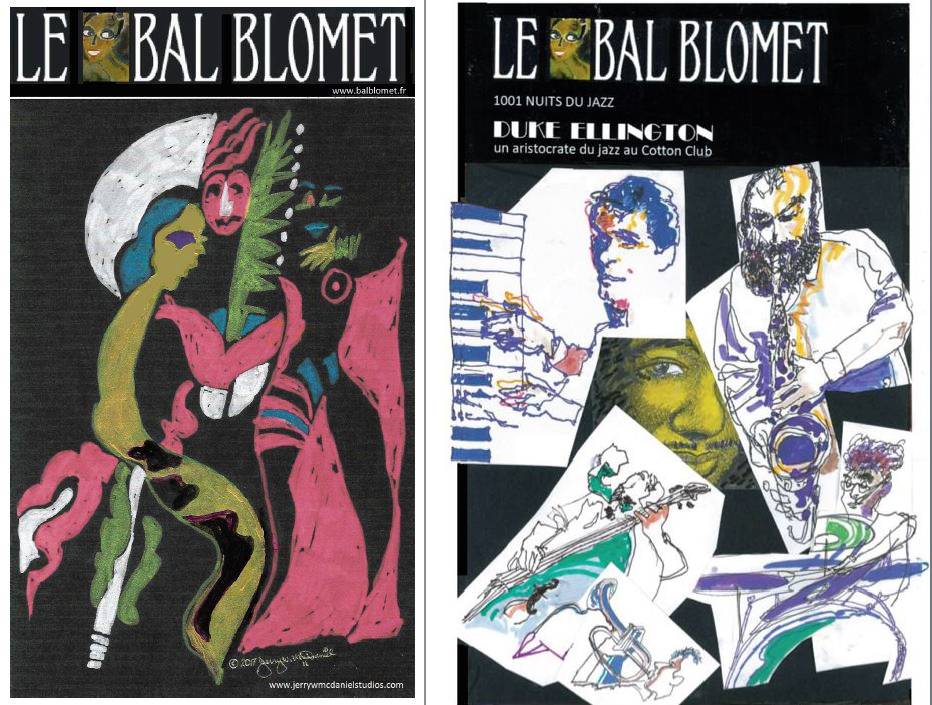 McDaniel just finished a poster commissioned for an evening with the Romanian cosmonaut Dumitru Prunariu to take place at the Columbia Memorial Space Center in Downey, on October 12, 2019. 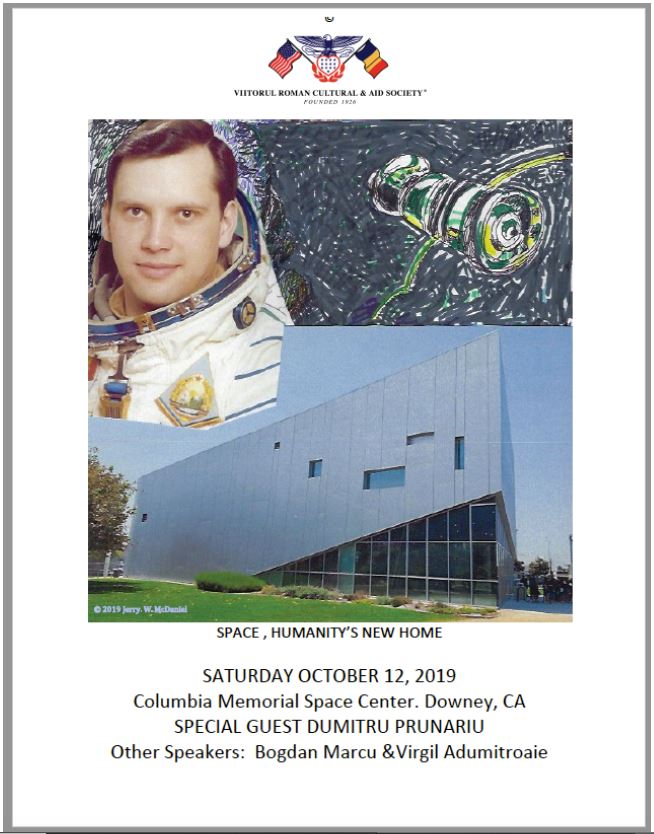 Interestingly enough the two Harlow’s posters by Jerry W. McDaniel are continuously offered online as vintage posters by different sellers for $150-$800 (with no money in McDaniel’s pocket). So much about getting rich as an illustrator/designer!

About the Artist
McDaniel is a heterogeneous artist who works in a multitude of media and is always explorihg new ways to see art. He is one of the most creative graphics designers and illustrators of our time. He creates distinct styyles for each commission. Jerry lived and worked in New York for 45 years, and moved to Los Angles in 2003. He has been commissioned by companies such as Pan Am Airlines, Intercontinental Hotels, Marlboro/Philip Morris Intl.

His art was published in the New York Times and its magazine, as well as in magazines such as Redbook, Seventeen, Boys’ Life, Good House Keeping, and others, in which many famous American illustrators started. He has created many posters (for sports, movies, music, the wine and food industries), illustrated and designed numerous book covers (fiction, non-fiction, and College textbooks) for several publishing houses, such as Scribner and Prentice Hall and others (e.g. he created covers for the entire collection of S. S. Van Dine mystery novels, and Zane Grey).

His best source of excitement is the abstract fine art he does. Most of his commercial art pieces was created as fine art drawings and paintings. He is deeply 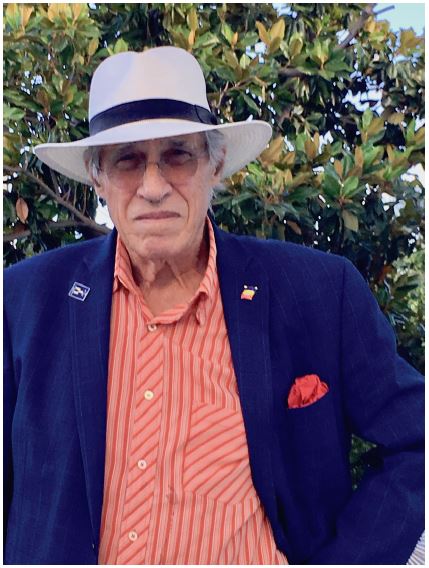 interested in how the conscious and unconscious brain solves visual problems. In 2008 Mr. McDaniel’s painting Grand Prix (for a poster for Philip Morris Intrnational and promotion of the Posthumous Champion movie) was selected to apper in the New York Society of Illustratos 50th anniversary commemorative book “Iocons and Images.” 25,000 illustrations appeared in the society’s annual during the 50 year period. Out of these several juries of professional art directors and illustrators selected the 500 to be included in this book.

Mr. McDaniel’s works are in the collections of the Metropolitan Museum of Fine Art, New York, the Museum of American illustration, New York, the Victoria and Albert (V&A) Museum, London, UK, the Columbus College of Art and Design (CCAD), in the 9/11 Memorial & Museum, New York and many corporate and private collections in the USA, and Europe. His work has been exhibited in numerous solo and group shows.

Artist’s statement
My objective as a heterogeneous artist is to express ideas through surrealistic – symbolism via subliminal factors in the use of color and typography. My motto is: “Give them what they want, but not what they expect.”

I’m a freelance children’s, interactive, and editorial illustrator based in Los Angeles, California. My work tends towards richly-detailed digital paintings that live somewhere between animation and photorealism. I enjoy creating characters that come from around our world, and that inhabit worlds of imagination.

I’m at home with conceptual thinking and communication, and I love to transform complex ideas into clear and appealing images. My extensive background in design and animation also helps me to see the big picture when illustrating for a variety of projects.

My professional practice has been focused on taking symbols from daily life and reworking them into images potent enough to strike passing audiences with an experience of aesthetic and intellectual encounter. I’ve been especially fascinated by how an individual artist’s unique vision, when developed and honed, can be at once exclusively personal and yet widely transcendent. This fascination with the expressive and communal paradox inherent in artistic development is what led me away from a career as a design director to start my own illustration and design practice. Its contours and questions still energize my development and practice as a visual communicator.

Thankfully, my disciplinary fascination happens to overlap with what has turned out to be vital professional practice—namely the need for the modern visual communicator to find ways of distinguishing their images in a hyper-saturated visual market. That quest isn’t, of course, something that ends with a degree or an award. On the contrary, its ongoing, evolving challenges form a large portion of what we refer to as professional practice. How does a visual communicator remain savvy and able to read culture? How does a visual communicator retain a vision robust enough to start or redirect zeitgeists rather than being conformed to them? As I engage with these tensions I’d like to think my images could have worked in 1909, or again in 2099—the point being that their appeal depends not on tapping the hype of contemporary culture, but, almost the reverse, on stripping away the hype to offer up an image conveying a timeless appeal.

My move to Portland in 2006 motivated me to explore and apply these ideas through projects aimed at connecting with the city, most notably, the formation of the Illustration Department at The Pacific Northwest College of Art. My hope for student development in and through cultural engagement is the pedagogical extension of my ambition for my own work. I am seeking to deepen the unity between my own professional practice, artistic voice, and cultural involvement. I am energized by seeking greater rigor, expression, risk-taking, and clarity in my work. Naturally, my general teaching philosophy reflects that kind of ethos: I want students to experience my classroom as a laboratory where processes, ideas, and historical/cultural backdrops are live-wires, highly-charged and dynamic elements through which we can better understand, better share, and better tell, our own stories. What’s more—and this is core to my overarching goal for myself and my students—I want the classroom to be a place where we learn how to press ever deeper into that powerful personal/communal paradox that a well-developed vision and a highly-sensitive mind can come together and create.