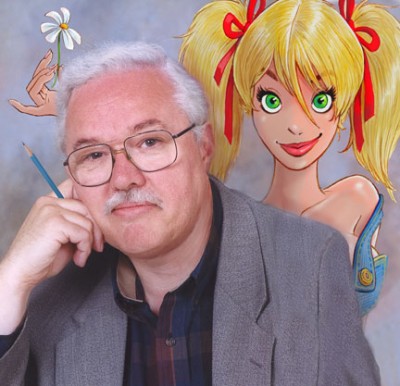 How did you get started in Illustration?
Most of my career has been in animation, but I’ve done a little of everything over the years – advertising design, children’s books and magazines, etc., and now gag cartoons for Playboy Magazine and publishing my own books.  But everything has come from animation, which I started in after my first year of art school in Philadelphia.

Who were/are you inspired by?
Lots of artists, writers and movie makers, whether or not their influence is apparent in my work.  Walt Disney, first of all, because I knew from a very early age that I wanted to be an animator.  I drew the Disney characters over and over, and invented new relatives for them, illustrating them in a small book.  Walt Kelly, possibly my favorite cartoonist of them all, captured my imagination with his POGO strip.  He could do it all – draw, write the strip and very sharp and funny prose and poems, and songs as well.  And he’d worked as an animator for Disney.  Then there are all the Warner Bros., MGM and Fleischer artists, New Yorker and Playboy cartoonists, Al Capp, T.S. Sullivant, A.B. Frost, Ronald Searle, Heinrich Kley, Antoine Barye, Rodin, Gil Elvgren, Bill Peet…way too many to fit here.  And still others working today who inspire me.  I hope I’m still learning.
Is there a project/assignment that you worked on that is especially
memorable? (Tell us about it?)

Well, I’ve had my own animation studio since 1986, and for eight years I produced, directed and animated the Cookie-Crisp TV spots.  They were a lot of fun, like doing little 30 second Tex Avery cartoons.  Before that I’d worked for Jack Zander, who animated on the old Tom and Jerry cartoons, and got to meet some of the great animators he’d worked with in the old days.  More recently, doing gag cartoons for Playboy has opened up an entirely different career for me, and resulted in gallery shows in Paris (!)
Do you have a daily routine? 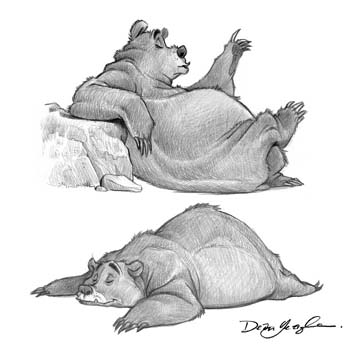 I work late into the night, so I get up around 9AM, but since I’ve worked for myself for 30 years, my schedule is whatever I decide it should be each day.

Did you have a mentor/teacher that was influential while you were studying?
I only had one year of art school, so studying was not as influential as actually working – in animation it was like being an apprentice in the beginning.  Lenny Cooper, at my first studio job at 19 in Philly, was a great friend and influence, and Jack Zander was a great boss and mentor after that.  But all those artists I never met inspired me, so I guess they are ‘mentors’ in a sense, too.
What medium do you work with predominately now?
I do the magazine cartoons in Photoshop, but always drawing first in pencil and scanning them. For the gallery and collector pieces, I use color pencils, gouache and ink on pastel paper.
Is there anything that you would do differently now that you’ve
had experience going through it?
Well, it had been my goal to work for Disney, but Walt died when I was in art school and my career went elsewhere, but still in animation.  Considering how things went at Disney’s for a while, I’m not so sure I’d have been happy there.  As it is, my career’s been varied and interesting.  I’ve worked in NY and London and for myself; in animation, advertising, illustration, character design, children’s books, toys, and gallery art.  I could have been a more savvy businessman, no doubt, but otherwise, no major regrets. 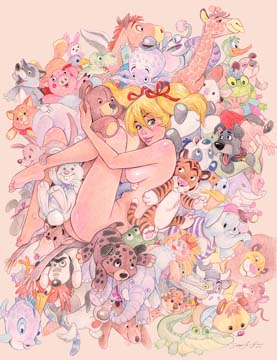 Where do you think the field of Illustration is headed in 5 years or 10 years?
Since I’ve been working, illustration for movie posters has disappeared pretty much entirely.  Magazine illustration also has atrophied.  Advertising illustration still exists, but budgets have tightened considerably.  Comic strips have gotten smaller and fewer, but some have popped up on the web.  Animation is almost never of the 2D, hand-drawn variety anymore.  So…the one certainty is that illustration and cartooning will keep changing.  I’ve found my career changing significantly over and over, and anyone getting in the business now can count on that, too.
What advice do you have for illustrators beginning and pro?
Based on all the changes I mention above, the best advice I can give is to keep your eyes open – new technologies and opportunities will arise, and you have to be ready for them.  And also, it’s important to have your own style.  Don’t copy whatever seems to be the current ‘flavor of the month’ in style.  Your work needs to be recognized as your own, and if someone wants that style, they shouldn’t be able to find ten more people who will do it more cheaply than you.
Where can we see more of your work? And watch your informative videos? Where can we purchase your books?
My books can be purchased directly from me by writing to dabeagle@aol.com.  Here’s what I’ve got at the moment: 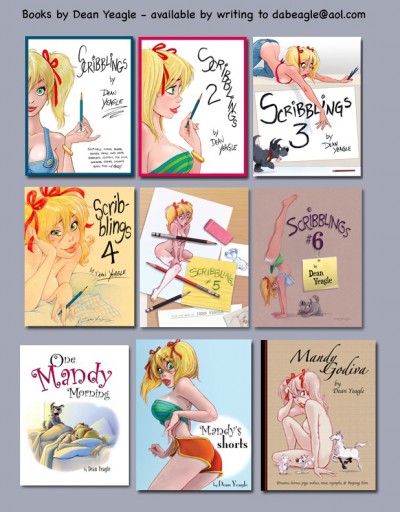 There are also three books of my stuff published in Paris.  Amazon carries a 160 page book that covers a range of work from animation to Playboy – that’s MÉLANGE, published by Akileos.  There are two SKETCHBOOK YEAGLE books published by Attakus.fr.  They’ve done a couple of sculptures, and so has electrictiki.com and csmoorestudio.com. My websites are http://gallery.bellefree.com/dabeagle, and www.cagedbeagle.com.  You can also Google my name and find various sites that have put up my work.

I work digitally to emulate a scratchboard technique. The use of line tells a story. I work with line to… Read More »

All of my work in illustration stems from my love of drawing: the act of putting pen and brush to… Read More »

Visual development artist and illustrator based in LA, currently she is a Background Designer at Hasbro. Graduated from Art Center… Read More »