Browse: Home   /   HERE’S THE INFO: An Evening with Arlen Schumer

HERE’S THE INFO: An Evening with Arlen Schumer 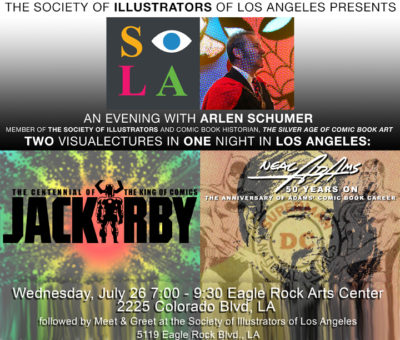 THE SOCIETY OF ILLUSTRATORS OF LOS ANGELES presents:
AN EVENING with ARLEN SCHUMER
Member of The Society of Illustrators and Comic Book Historian (The Silver Age of Comic Book Art)
Wednesday, July 26 @ 7:00pm – 9:30
Eagle Rock Arts Center
2225 Colorado Blvd.
Los Angeles
Followed by a Meet and Greet at the Society at 5119 Eagle Rock Blvd.
Join The Society of Illustrators of Los Angeles as they welcome renowned Comic Book Historian and member of The Society of Illustrators (of New York) ARLEN SCHUMER for an evening of comic book art history as you’ve never seen comics before!
Mr. Schumer will be fresh from his star turn at the 2017 San Diego Comic-Con International, where he will have presented his multimedia “VisuaLecutre” (as he’s branded them) on the Centennial of the legendary comic book artist and storyteller JACK KIRBY (co-creator of the entire Marvel Comics superhero universe), and will not only be bringing that VisuaLecture to Los Angeles, but he’ll be pairing it with a presentation on the 50th Anniversary of the entry into the comic book field of another legendary comic book artist, NEAL ADAMS! Adams is best known for his radical 20th Century comic book transformations of DC Comics’ Batman and Marvel Comics’ X-Men that led to both franchises’ multi-platformed success in the 21st Century.
Though their drawing styles are on opposite ends of the comic book spectrum—Kirby’s hyper-exaggerated anatomy versus Adams’ photo-realistic figures—Adams’ visceral impact on the medium can be considered as great as Kirby’s. Come see Mr. Schumer’s distinctively dynamic dual presentations and see why!
In between VisuaLectures, Mr. Schumer will be signing copies of his hardcover coffee table book, The Silver Age of Comic Book Art (Archway Publishing), that won the Independent Publishers Award for Best Popular Culture Book, and about which another legendary comic book artist and storyteller, and co-creator of both Spider-Man and Doctor Strange, STEVE DITKO said, “It is a unique achievement by Arlen Schumer, and will be an ongoing source of reference, study and enjoyment for everyone interested in comics.”
RSVP: contact Alyce at the office info@si-la.org or 800-799-6368.
www.si-la.org
www.arlenschumer.com

I am a New Mexican born artist who paints the liminal…those in between spaces…the misty and mystical, wild and free… Read More »

I love to get to know the story, the characters and the environment that surrounds them. Title: Father,Daughter,Fish_small file for… Read More »

I enjoy creating illustrations around nature involving magic and fantasy. Most of my works are digital, create in Photoshop and… Read More »

All of my work in illustration stems from my love of drawing: the act of putting pen and brush to… Read More »

I try to find the simplest solution possible, often using metaphors as a tool to tell your story in a… Read More »

I’m a writer and I also work as an artist. I mostly do cartoony work for kids’ books, greeting cards,… Read More »